On December 2, 2016 by admin With 0 Comments - Uncategorized

In November 2016 my painting For Mum won the Staff Choice Award at the 2016 Eutick Memorial Still Life Awards, Coffs Harbour Regional Gallery. The painting, dedicated to my Mum who sadly passed away July, became a cathartic vessel that helped me through the grief and gave me a focus in the painful weeks following her passing. Over 250 hours of painting went into it and I know Mum would be proud. Following is the passage I wrote for the EMSLA Catalogue.

When I began this painting I had no idea I would be dedicating it to my Mum. After hearing of Mum’s cancer in late July, I realised this painting, which depicts Chrysanthemums infested with caterpillars, might be about her. Four days later she passed away. I know Mum wanted me to finish this painting and enter it in the EMSLA, so I made an extreme effort to get it done and entered. Thankfully it is a finalist and I get to share with the world this object that became a symbol of so many things and into which I poured so much time, emotion, grief, pride, love and just a couple of tears. 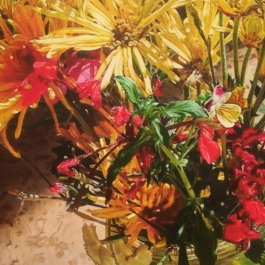 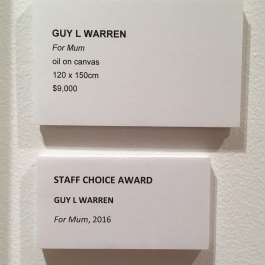